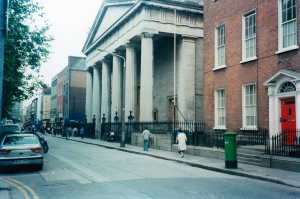 The building of the Pro- Cathedral began in 1816 before Catholic Emancipation and is situated off O’Connell Street for that reason. It is a curious mixture of Greco-Roman architecture. Sweetman, the architect, is said to have based his design on the Church of St. Philippe-du-Roule in Paris. Newman was solemnly installed as Rector of the Catholic University at the Pro-Cathedral after High Mass by Dr. Moriarty, Bishop of Kerry, in 1854. Newman wrote to his oratorian confrere, Fr. Ambrose St. John, “The church was more crowded than ever known”. There is a very fine statue of Cardinal Cullen, who was responsible for Newman coming to Dublin to establish the Catholic University, on the left entering the church.